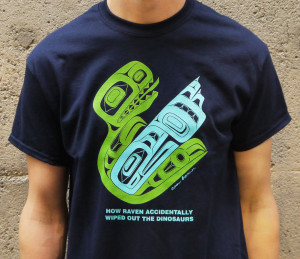 “At a certain point in history, the Raven mythologies stop. I am interested in continuing the Raven narratives. The task we have been given as First Nations people of rebuilding our cultures is very serious. Because of that, First Nations people themselves have been cast as very serious. In attempting to stay consistent with the tone of the old stories, the Raven mythologies focus on humor while attempting to bring the stories into present day.

What did our ancestors think, if and when they encountered a massive fossil? “How Raven Accidentally Wiped Out the Dinosaurs” tells the tale of how one of Raven’s schemes elsewhere in the cosmos backfired, sending him smashing into earth. Obliterating life as it was then, and ultimately clearing the way for human civilization.”

Adult and kids’ sizes are available and can be shipped internationally. To order, contact shop@moa.ubc.ca or 604-827-4810. 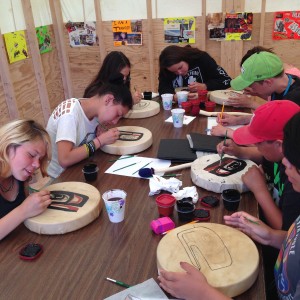 Students paint formline designs on the drums they made

Alison Bremner recently participated in the Yakutat Culture Camp as a formline design instructor. Students learned the basic rules of formline and painted drums and rattles they had made. By the end of the 10 day camp, students were successfully combining the elements of formline to create their own designs.

It was an absolute gift to teach and spend time with the campers. Thank you to the Yakutat Tlingit Tribe for creating such a supportive and inspiring environment for our next generation! 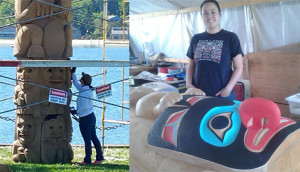 2015 has been the summer of totem pole painting! Alison Bremner is fortunate to have apprenticed with Tsimshian master David A. Boxley and Tlingit artist Fred Bemis on their respective totem pole projects.

Carved in 1995, Boxley’s 40ft pole stands in Port Ludlow, WA. Bremner was part of a refurbishing team brought in to repair and repaint the pole. It is expected for a pole to require touchups after being exposed to the elements.

Fred Bemis, a Yakutat Tlingit carver, was hired by the Rasmuson Foundation and the Yakutat Tlingit Tribe to create a 12ft totem pole. The pole tells the story of the relationship between the Yakutat people and the Rasmuson Foundation family. Bremner was brought on as an apprentice to paint what was the second totem pole in post-contact Yakutat history.

Upon completion, both poles were welcomed with a day of ceremony. Thank you to David A. Boxley, Fred Bemis, the Rasmuson Foundation, and the Yakutat Tlingit Tribe for the wonderful opportunities!

Alison Bremner’s work will be included in the upcoming exhibition, “IN THE SPIRIT Contemporary Native Arts” at the Washington State History Museum. Located in Tacoma, WA, it is the 10th anniversary of the exhibition. The exhibit, which opens on July 16th, will be accompanied by a dance festival on August 8th.

Alison Bremner is honored to have received a 2015 Spring Native Arts Grant from Potlatch Fund.

The Tlingit culture is a visual culture. Prior to contact, an individuals crest told you who they were and their clan’s history for thousands of years back. Art was not simply decorative; it was essential to identity. Due to an all to familiar history of colonization, removalism and westernization, the presence of art has greatly diminished in Yakutat. Yakutat’s ancient art can still be seen in museums across the world.

With the assistance of the grant, Bremner will apprentice with Tsimshian master carver David Albert Boxley  for a period of two months to learn traditional mask making. At the end of the two months, Bremner will replicate an old Yakutat mask. The mask will be brought home to Yakutat for public display, and will be gifted to the community.